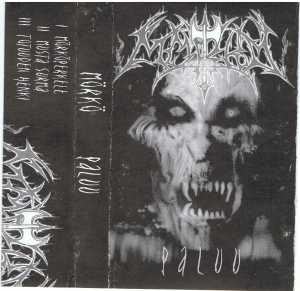 And now: something completely different. Yeah. This blog is not all about ancient thrash metal. It's not about any genre in particular, but it's about old metal tapes in general. There's a difference there, eh? I got this old(ish) tape from my friend JH (Cheers, mate!), listened to it, liked it... and thought that it might be a good thing to upload something different for a change. So I did. This band's name is Mörkö and this is their "Paluu" demo from 2000. And it's pretty damn good, but a rather short demo with three Black/Doom Metal (according to The Metal Archives) tracks. The band later did two full length albums and are still active today.

PS. This band is related to one of my recent faves Jumalhämärä, whom I recommend you to check out if you're interested in avantgarde/experimental black metal. 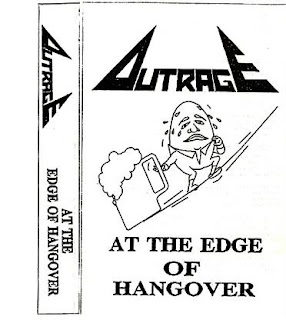 Outrage from Hormajärvi, Finland - vocalist Erkki and bass player Pete were also in Mayhem, who also hailed from the same small place. Don't be confused about the intro in the first song and don't turn the music off... yes, the intro is fucking horrible, but so was the original song too. I mean if you had forgotten (or perhaps never even heard) about that horrible, horrible, horrible pop "band" called Bros... well, you've been reminded about them now. The intro to "Like Father Like Scum" is indeed Outrage's own version of a huge Bros hit known as "When Will I Be Famous". Yeah. Click the link if you want to know more about that abomination. Just don't say I didn't warn you. Bring yer barf bags & shit, y'all. But enough of Bros, we're talking about Outrage here. This is a demo tape full of thrash metal, sometimes very fast thrash metal actually. I mean there's some parts in these songs that have... well... blast beats. Or at least something very close to blast beats. Am I sensing a grindcore influence or something? What? Does it really matter? Who gives a flying fuck anyway? This is a good demo and like everything else in this pathetic blog of mine, it is recommended by yours truly. Download the fucker & check it out! 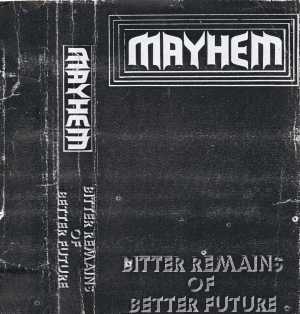 Oh yeah. Thrasher kids of Cold War era writing lyrics about the impending nuclear war... and getting drunk. Kinda typical, but there's absolutely nothing wrong with that. I guess there must have been literally thousands of thrash metal bands doing the same thing everywhere in the world back then. Apparently these Finnish Mayhem dudes had not (yet) heard about their infamous Norwegian namesake when they were recording this demo in late October 1989. Vicious and sometimes extremely fast (especially during the opening track) thrash metal which occasionally reminds me a bit about another Finnish band - Protected Illusion. Actually there IS a connection here: the drummer/vocalist Erkki Virta of Mayhem joined Protected Illusion a bit later (or perhaps he already was a member of PI when he played on this demo?)... and the last time yours truly heard about him was in 2008 when he played drums on the excellent doom metal album Lithium Gates by The Puritan. So I suppose he's kept himself busy making music since late Eighties. No idea about the other guys. I suppose they just got day jobs and started families & shit like the rest of us old farts. That's the way life goes I guess. Anyway, this is a great demo but perhaps a bit lengthy one - I mean there's eight songs on this demo and it lasts about half an hour so it's almost more like an album than a demo tape, but this is definitely one of those things from the Finnish scene of the late Eighties that deserves to be heard again. 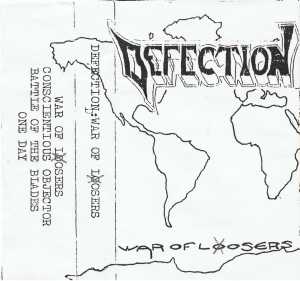 Defection from Vantaa (Mika - guitar+vocals, Jökä - guitar, Pete - bass, Jone-drums)... this is thrash metal played the way it's supposed to be played! There's no year mentioned in the cover of the tape, but I suppose this is from the late Eighties. This is yet another rather unknown band, but some of the people involved with this little tape have made some things later that may have made some of you out there notice them. First of all this demo was recorded and mixed at TTT-music studio by the one and only Timo Tolkki himself. I suppose most of you have heard about Stratovarius and some of the other bands/projects he's been involved with. Then there's the bass player of Defection, Pete Peltonen, whom some may or may not remeber from another Finnish thrash band, Antidote, who made three albums in the Nineties. There's some session keyboards on this demo - played by Kari Tornack, who played on several albums by Thunderstone. So this is indeed some early work by guys who later did something different and got signed and all that crap... Anyway, this is a very good demo by yet another forgotten band - check it out. It's definitely worth a try.

Hammerhead from Helsinki. I got this one through tape trading. Remember tape trading, pen pals, letters, envelopes, stamps, all those lovely things? Yeah. It was a different world indeed in the late Eighties... and so was Hammerhead. Different, I mean. They were one of these bands that me & my friends really liked... and yet another one that just sort of vanished. They had perhaps a bit less straight-forward approach to their music than some other Helsinki area bands of that time. Which basically means that they had a few more riffs and tempo changes in their songs and the song structures were very varied... and in general the songs weren't exactly 'short but sweet' either. Call it 'technical' or 'progressive' or whatfuckingever, it's still enjoyable and that's all that really matters, right? This is called Demo '88 but it sounds almost like they're playing this stuff live. Or then it is a low budget studio recording. I don't know. It's a shame I don't have more info about this tape. I mean I only know one of the song titles, and that's only because it was played once on the radio and I happened to hear (and record) it... and now that I'm thinking about it I'm not even sure about that one song title. But it says on this piece of paper that I have that track #4 is called 'Thing', so I'll call it 'Thing'. Might have been something like 'The Thing', originally... does it really make a difference? No, not really. This monster of a song goes through several changes before the lead vocals come in at around the three minute mark. Not exactly simple pop music, eh? Yeah, I consider this 'Thing' a classic tune. Loved it in 1988, still love it in 2011.

1. Teargas stories
2. Sharp is the knife
3. Faceless dawn
4. The Thing 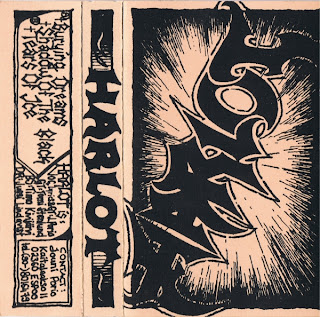 Now this is probably as obscure as it gets, and at the same time one of my absolute faves among the piles of old tapes I have. I have rarely seen this band mentioned anywhere, and despite (because?) of that I still think they were one of the very best Heavy Metal demo bands Finland had to offer back in the days of USSR and Cold War and other such Utter Bollocks. And it really seems that almost no one has ever heard of Harlot. Well, at least not too many people have heard about them. I saw Harlot live with my mate ML back in '89 in Espoo and we were completely blown away by their performance. Of course we went to meet the guys after the gig and I bought this demo tape that you can now download. Never saw them live again and never even heard anything about them after that! That's how it was back then. No Internet, pretty much no information easily available - have a nice trip to the Land of Obscurity with your music, young man!

This demo is actually a bit heavier than I rememebered. This is sort of a borderline thing between two genres - the songs definitely have a strong Speed Metal thing going on too. There's something familiar about the vocals, but I can't figure out who does the lead singer sound like. There's plenty of skillful guitar playing and all that crap that is usually expected - this band was really a pretty fuckin' professional sounding unit when compared to many of the other new bands in the Finnish Metal scene at the time. But hey - check them out yourself. I'm pretty sure you won't be disappointed.

Aaaahhhhh! The good old Herttoniemi Youth Club in Helsinki. I saw many great (and not so great) bands there 20+ years ago... and apparently recorded at least one of the gigs I saw. Don't remember anything else about this particular gig though. No idea about who else played there besides Virago. Anyway, judging by the audience reaction (yeah, I edited all/most of it out, and it was pretty much nonexisting anyway) it must have been one of those gigs that just sucked ass. Those tend to happen from time to time, and yes, I've been a "victim" of such shit gigs myself - on and off the stage. Anyway, I just checked it out: 26 August 1990 was a Sunday! Now I'm not wondering at all about the lack of enthusiasm. :D Anyway, here we have Virago playing a few songs and that's pretty much it. No bullshit. The sound is what it is - I must have recorded with an old crappy boombox or something... and there was no good recording equipment available anyway back then for a broke, stupid young dude like yours truly - or anyone else. Nowadays making your own "bootlegs" is easier I guess - it's a different world with all this digital shit that's available everywhere.

Don't know much about this tape either. If I remember right I got this from a friend (who got it from a member of the band - the drummer, I think) back in '88 and I suppose it was recorded early that year - might have been recorded even in '87? Who knows? Anyway, this is your usual rehearsal stuff with a sort of a decent sound for such a shitty old tape. There's some good songs on this one. Perhaps they are a bit simpler songs than on the demo I posted earlier, but this is an older tape, so obviously the band must have also been a bit younger and more inexperienced. Blah blah fucking blah. Download the thing if you want to. :D

Meet Virago. These guys were pretty active in the late Eighties right in the middle of the Speed Metal craze which wreaked havoc among the youth of Finland. Led by bands like Stone, Airdash and A.R.G., the metal scene of Finland quickly grew bigger than it had ever been before. As always, behind the bigger names of the scene came legions of other bands which for some reason never got signed. Virago was one of them. They played lots of gigs with the major bands of the scene and were pretty popular in the Helsinki area, but somehow they never got any further than that. Like many other bands of the era they just slowly faded away in the early Nineties. Or that's what I think happened to them. If you have more info about them, I'd like to hear it. Anyway, here's a demo tape of theirs from 1989 for you to check out. Don't have the cover - don't know if such thing even exists. Don't even have a photo of the band, but there's always the music. And it's pretty damn good. There were much worse bands out there back then. SACRAMENTAL! WARFARE!!!

Ahhh... those were the days!