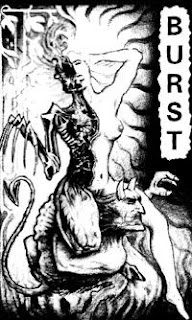 Yeah, I know it's been a while since I posted any new shit, so it's about time I did something about it.

Here's a demo by this band called Burst from Keuruu, Finland. This demo and some other stuff by them is actually available just by clicking the link and downloading the shit from there... but since I had already ripped this I thought that I'd still post it here. Shit happens. Yeah. I like this one, so perhaps it deserves your attention. This demo was recorded in June 1992 so it must have been pretty out-of-date stuff by the time it was released. It has a good sound quality and musically it's kinda obvious that these guys must have been listening to bands like Stone quite a bit. I don't mean that Burst was a rip-off band or anything, but there IS this certain "Finnish Speed Metal" thing going on within these songs. You can hear the influences for sure even though this is a demo from '92 and for most of the time the band seems to be looking for something else than the Speed Metal thing musically. On their Metal Archives page they're called "Progressive Metal". Perhaps that's what this is then?


I remember seeing this band live once... don't know when exactly - very late Eighties/early Nineties, I suppose. Anyway, what I do remember is that they played at the infamous Herttoniemi Youth Club in Helsinki with a bunch of other bands and that they were definitely a good live band (they certainly played a lot more speed metal influenced stuff live than on this demo). Too bad that the times and the metal trends were already changing by then, so like so many others, they ended up being one of those bands that never really went anywhere.