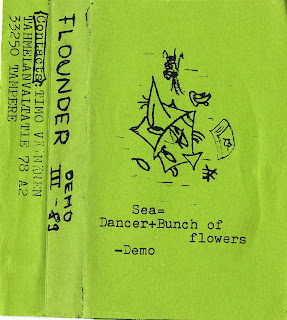 A.K.A. "Sea=Dancer+Bunch of flowers demo"

OK, so did you listen to that Flounder demo I posted? Good. Now prepare to get royally mindfucked. I mean if you thought the previous demo was a bit strange, what the hell is this then? I'm at loss for words. Listen to this one yourself and then think about this: how the hell did these guys manage to remember all these parts in these songs and what the fuck were they thinking anyway? I mean this is definitely not your standard rock music with your standard rock music structures and all that crap. This is, well... mindblowing and adventurous music that does not fit into any genre whatsoever. Yeah, sure, there definitely IS metal among other things, but isn't some of this really more like Voivod playing tango while being assraped by the late great Frank Zappa?

Listen to it yourself if you dare. 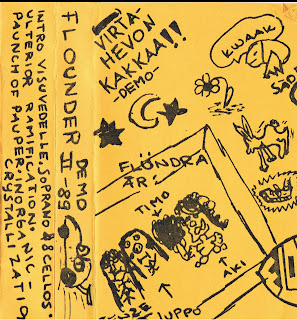 Flounder was certainly one of the weirdest bands in the late 80's Finnish metal scene. Experimental? Yes. Avantgarde? Yes. Weird jazzy bits here & there? Hell yeah. All of that mixed with thrash metal. It's still very entertaining stuff if you like unusual stuff. After making four demos Flounder did an EP in 1992 and then vanished. I was a huge Voivod fan in the Eighties - I still am actually - and Flounder reminded me of them somehow. The were not a clone band or anything like that but their weird song structures and the guitar playing reminds me of the Canadian masters of weirdness. And also like Voivod, Flounder is not for everyone but something else. An acquired taste. It's either Art or Incoherent Bullshit. It depends on the listener, of course.

This is Flounder's second demo and yes, it's fucking strange. That probably describes it well enough. Like it or not, at least it's not yet another generic thrash metal demo. This one's also known as "Virtahevonkakkaa!!!" demo. That's something like "Hippopotamus poo!!!" in English, in case you were wondering WTF is that supposed to mean. ;)

PS. Two members of Flounder later appeared in the legendary Finnish Death Metal band Convulse. Flounder's guitar player Aki Yli-Salomäki is apparently these days an award winning composer of classical music and all these great arty things I don't know much about... 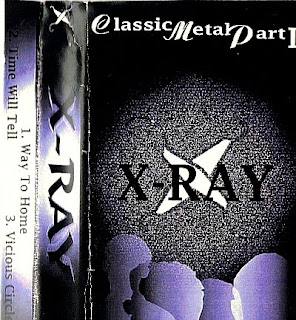 Say what? Classic Metal Part I? Was there later a part II or perhaps even a part III?

It seems that this band from Rusko, Finland called X-Ray, consisting of a bunch of 18 year olds (Antti Kaasalainen - vocals & guitar, Samuli Sairanen - guitar & vocals, Matti Paajanen - bass, Hannu Paappa - drums) vanished without a trace like most demo bands tend to do. This is especially true in this band's case since not even the almighty Metal Archives knows anything about this band. Or at least they didn't know until early 2012 - someone out there will most likely add this band to their database sooner or later.

I have no clue how this tape came into my possession, but it has been originally sent to a Finnish metal label and yes, there's some words written in the back of the demo cover by one of the band members. You know how it is - all the usual stuff hoping to gain the attention of the record label guys, "here's our demo, listen to it and let us know what you think, blah blah blah"... I certainly have written that kind of stuff in the past, trying to get signed... anyway, this is not about me or my music, this is about X-Ray's music... and the music's kinda OK. I'm not the biggest fan of the 90's European Power Metal Scene, but it's pretty obvious that these guys listened  to all the important bands of the time, you know, Helloween, Stratovarius, Gamma Ray and probably a few hundred more. I suppose generic is the word that should be used here - I think this is pretty much what this demo tape is - a quite typical 'heavy/power metal by numbers' kind of thing. I mean everything about this tape just screams that it's OK but nothing more. The guys can play OK, the vocals are kinda OK but could be a bit better, but you know what? I think it has some value anyway - it's a nice reminder of how the metal scene was back then. Melodic heavy/power Metal was the big thing in Europe and thousands of young hopefuls played the style back then, hoping to get signed and becoming big stars with plenty of money and pussy and whatever... there must have been lots of stuff by bands like this every fucking day on the tables of all the A&R guys in all the record labels back in the Nineties.

Hello... it's 2012 already and I'm trying to get things rolling again. I'm at the moment ripping yet another tape for your listening (dis)pleasure, so I can safely say this blog is not dead. However I haven't really checked yet if all the earlier uploaded stuff is still there where it's supposed to be. If you find a broken link, don't forget to report it to me. I'll reupload anything & everything if needed.

Anyway, the next tape you'll find here will be a late 90's demo by a totally obscure power metal band from western Finland. You'll get to hear it later today. It's a promise I will keep.
Posted by Sir at 9:52 AM No comments: